I'm a software developer from Melbourne, Australia based in the USA

Communicate with government surveillance programs via your metadata. An artistic collaboration with Rosa Nussbaum.

These are the ansible playbooks and roles I use to provision my servers and deploy the various sites I maintain to them (such as this site).

A point-and-click style game inspired by Myst. The game is web based, written in JavaScript and runs entirely client side requiring only a web server to host the static files.

This code was used for an art project in collaboration with Rosa Nussbaum, commissioned by 12ø Collective in 2016.

There is an older demonstration available here running a "static" mode map. See the readme on github for more details.

This website, built with Jekyll and Bootstrap. A replacement for my old website which has been around largely unchanged since about 2003.

A simple bash script to replace the authorized_keys file on each of your servers with a provided list of public keys.

A Reddit bot which looks for comments containing at least level 3 superscript text (text with ^^^ before it) and replies with a full-sized version of that text.

Helps you deal with your growing number of .NET Resource files by quickly showing you the differences and similarities between them as well as performing simple operations on them.

It's based on VB6 game I wrote in highschool (see below)

It takes an XML "mod file" and a canvas element as input. The mod file describes the enemies, weapons, images and sounds that should make up the game. A playable level is then generated based on simple provided generation parameters.

There is a playable demonstration here 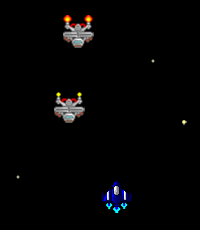 This is an arcade style game I wrote in VB6 which I used to hack on every now and then at school when I should have been doing something else. I probably worked on this between about 2003-2005 when I was 14-16 years old.

A Conway's Game of Life implementation in VB6 I made for a school science project in 2003 when I was 14.

A simple natural selection simulator/demonstration I made in VB6 for a school science project in 2001 when I was 12.